Winner 2017 Excellence in Care Awards in the Organisation Category as part of the LASA Qld State Conference.

Winner 2016 Construction Award for Community Accommodation for Aged Care and Nursing Homes – For their 26-bed high-care and dementia secure extension opened in June 2015.

Winner – Offering a “Stool Party” education session which included a game of Celebrity Stool.
View one of our interesting education videos which formed part of the session – “The Squatty Potty”

The Governor-General, Ms Quentin Bryce AC CVO, as Patron of Australian Meals on Wheels, made a very special visit to recognise the 40th anniversary of Meals on Wheel’s operations in Pittsworth. 2016 marked an amazing 40 years of Pittsworth Meals on Wheels making and delivering meals to those in need. 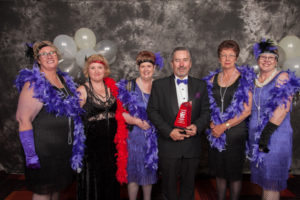